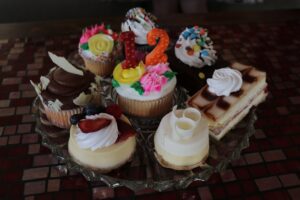 Two of my three kids have had birthdays so far during COVID-19 quarantine.

My son, D, turned 10 back in April, when life-as-we-knew-it had just come to a screeching halt.

In this post, I’ll talk a bit about what it’s been like planning parties for kids when the “normal options” just aren’t available.

When my son’s 10th birthday rolled around in April, I was still in full-on parent-panic mode:

“How can I not hold a birthday party for my child??!!”

However, problem-solving is an antidote to nearly all of life’s – well, problems – so I shifted into this mode, and came up with a bunch of ideas – none of which seemed sufficient at the time.

My ultimate goal was to try out as many ideas as possible and see which ones would stick.

In other words, if you offer 5 activities and 3 are fun but two are “meh”, have you succeeded? I figured the odds were better than otherwise.

So, for my son D, here were the basics of what we did:

The through-line theme – “we let him” – was very intentional. That is, while the world may be in absolute chaos, my goal was to stress that we always do have some choice and control.

Next, I tried to brainstorm what kids really like the most…

Could I do something special with candy?

I decided to create a “candy scavenger hunt”, which started with my husband taking my son (wearing masks) to the drug store  and letting him choose his top ten favorite candies.

From there, my daughters and I figured out ten places inside and outside the house to hide the candy, and I created rhyming clues.

(Heads up: kids love doggerel, so the worse the better – as long as it rhymes!)

Here’s an example of what I wrote:

Look among the Legos
We know there a ton
But if you keep looking
You’ll find some candy fun!

After the hunt, my son got to share his (many, many) candies with his sisters – thus giving him the agency to let him do this as the Birthday Boy.

Finally, following the lead of my older sister (whose daughter had turned 13 in March), I hosted a Zoom gathering with cousins, aunts, uncles, and D’s Mormor and Morfar (Norwegian for “mother’s mother” and “mother’s father”). It was special and unusual to see all his cousins at once, since we all live across the continent, so – score on that point for novelty.

We started off the Zoom “party” by doing a quiz about D’s life, seeing who could accurately recall the most details about his childhood.

Then we shifted to a scavenger hunt (an idea provided by a friend – thank you, K!) and the fun really began. My son absolutely LOVED being in charge of sending everyone off to go find various items (he selected the following categories):

In Apples to Apples style, D got to judge his favorite from each category, and as family members picked up on this competitive energy, the tension mounted (in a fun way).

All told, while D definitely missed getting to see his two best friends (he spoke with one on the phone), he seemed reasonably happy with his birthday, and I considered it a quarantine success.

After my son’s party, my 7 y.o. daughter started getting invitations to drive-through birthdays. I had vaguely heard of these in the news, but wasn’t exactly sure what they involved – so, after mild panic and discombobulation, I looked it up.

I watched a helpful video on YouTube, and came to understand that the basic premise is having the birthday child out in front of their house while a parade of well-wishers come driving by to honk and wave and yell “Happy Birthday”.

My 7 y.o. “I” has now “attended” three drive-through birthdays (with me at the wheel), all slightly different.

The first involved meeting up with other families (masked) in a parking lot, decorating our cars with markers and signs, then parading together single file in our cars towards the birthday girl’s house, where she (M) was waiting with her dad and brother and gift bags to hand out. The drive-by greeting itself was over within a minute, which felt a little odd – but M was getting LOTS of adoration and attention from dozens of people, including neighbors standing outside to look and cheer as well, so it felt like a complete “pandemic party success” from my perspective.

The second drive-through party “I” attended didn’t start with an initial meet-up. Instead, the hosts offered an hour’s window to come by and say hi, which meant we could take our time and not feel rushed by a crowd of other cars ahead of and behind us. We actually got to spend 10 minutes chatting through our car window with the birthday girl, asking how her birthday had gone so far, what she was planning to do that evening, etc. A present and a gift bag were exchanged, and (typical for 7 year-olds) every single gift bag item was cherished and appreciated by my daughter on the drive home.

The third drive-through party “I” attended was a mix of the first two. We were given a specific time to drive by, and there was healthy crowd of cars waiting around for a turn. The birthday boy gave my daughter an ice cream bar using a “Go Go Gadget Arm” tool and this (the ice cream) was literally the much-discussed treat of her day. We left with a honk, as other friends came up for their turn to say hi.

My daughter C started thinking about her birthday weeks ago, wondering what her options were, and how in the world she could make it fun.

She gave up immediately on coming close to the magic of last year’s birthday, when we took her and a small group of friends ziplining through the forest (heck, that was MY best birthday party ever!) – but she still wanted to find some way to make this depressing year memorable.

Her most recurrent comment to me during our planning time was, “Surprise me. I want to be surprised.” I appreciated that sentiment, but knew I needed to strike a balance to ensure my ideas were close to the ballpark of what she wanted.

I considered hosting a drive-through party for C, since I now had a few templates to build on, but she told me she was less interested in this than getting to see a couple of close friends.

Thankfully, while we’re still in quarantine, life has opened up a tiny bit to allow for “bubble friends” (a.k.a. “quarantine friends” – kids whose families we know and trust and feel comfortable socializing with now and then).

So, her party was an interesting hybrid of approaches.

I started with the most successful idea from my son’s party: the Candy Scavenger Hunt. I made a special date to take my daughter to the store with me (masked), and let her carefully pick out her top ten favorite candies.

(Parents, don’t underestimate how amazing this process alone can be. Remember the days of feeling like your parents controlled everything about your candy consumption, and the idea of picking out not one but TEN candies was like being invited to an exclusively-fun version of Willy Wonka’s Factory?)

Back at home, I enlisted the help of my two younger kids in finding ten spots around and outside the home to hide the candy, and once again wrote some quick “doggerel” clues:

Just three more left! Can you find them?
Go back inside and head up the stairs.
Check the spot where our vacuum is hidden
And a candy will solve all your cares.

The hunt was once again a complete success, other than ants crawling into the sealed box of Milk Duds that had only been outside for a couple of hours. (Ew! She’ll get a re-do on that.)

The night before her official birthday, we held what has now become a “traditional” Zoom party with our family members (we had also done this for Father’s Day and another cousin’s birthday in the meantime). This involved:

I took some screen shots during the “party” – including, of course, a “funny face” one – and sent them to everyone as a “party favor”.

Finally, C had a sleepover with two close “quarantine friends”. They went swimming in the lake, had a dinner of C’s choice (yay for Trader Joe’s mini chicken tacos and potstickers!), ate an array of delicious (bakery-made) pastries, opened presents, and watched a movie (actually, two) before spreading out in sleeping bags on the living room floor and conking for the night.

This last part of her party – i.e., actually hanging out LIVE with FRIENDS – is the biggest indication that we’re in a new and different phase of this seemingly interminable pandemic. It’s a risk, but a calculated one, which all parents (aaaaaakkkkk!) are required to make these days.

Speaking of quarantine, one question on C’s Zoom birthday quiz was: “What are you MOST looking forward to doing once quarantine is over?”

Her response: “Having all my friends over for a huge sleepover!”

That can’t happen right now. In the meantime, we’re settling for the Next Best Creative Compromise.

And that process alone – coming up with viable alternatives when life hands you an avalanche of lemons – is undoubtedly a valuable one for all my kids to be living through.

Copyright © 2020 by HalfoftheTruth.org. Please feel free to share with attribution.