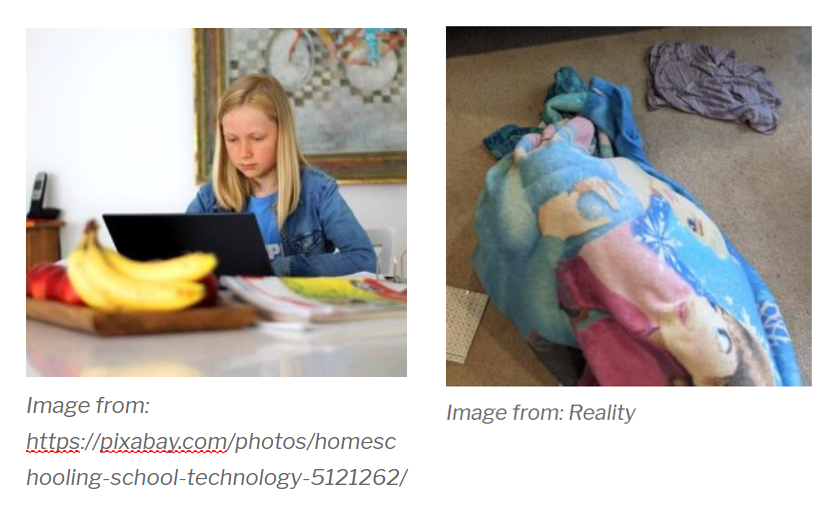 There have been many moments during the past few weeks of remote learning when I’ve been tempted to stop and write a post about a “sample day” – just to give a taste of what life in our household of three twice-exceptional learners is like.

The moment that led to the “Frozen blanket pic” above is what finally motivated me to take the time to write for a bit.

My 7-year-old “I” entered an advanced placement 2nd grade classroom this year, which covers 3rd grade math standards. (I wrote about her math anxiety in a previous entry.) Since she basically skipped 2nd grade math content, we’re working hard to help her feel comfortable with lots of new concepts.

Thankfully – and perhaps predictably – “I” understands the underlying concepts of multiplication and division just fine. However, she still struggles with anxiety and avoidance around both demonstrating her knowledge in writing and memorizing basic math facts. She’ll guess, equivocate, try to flee the room, state “I can’t do this!”, ask for a snack, groan, twist around with her legs up in the air, and basically do anything except “just” sit and “do the work”. It’s exhausting watching her (and, truth be told, supporting her).

Indeed, the picture taken above was preceded by a ton of rolling around on the floor (“I”, not me – though I sometimes resort to yoga poses myself to de-stress); “I”‘s purple dress hovering over her head for awhile; her dress finally coming off (you can see it in the background); and finally the “Frozen” blanket being wrapped all around her as a protective cocoon. Throughout this process, we talked about how many wheels are on 1 tricycle, 2 tricycles, etc., as I filled out several function tables for different items. I scripted all her responses in her hard-copy math workbook, and she then added all the answers electronically to her formal Seesaw assignment to turn in. (Yes, she had to take the blanket off and sit in front of her computer to actually input data. But once the anxiety of doing the actual work itself was gone, this was no problem.)

It struck me as humorous that the reality of our “working from home” schooling looks so incredibly different from all the posed pictures you see in online articles – like the one I placed as a contrast photo at the beginning of this post. I’m sure there are plenty of households where kids actually sit in front of their computers at a kitchen table or desk, waiting for break time to eat the perfectly ripe bananas in the foreground – but that’s not us.

During her live Zoom meetings, “I” will either be lying sideways on the floor or huddling in her bed, chewing on hunks of ice. My 10-year-old D. turns off his video (with permission from his teacher) and hides himself in his blanket on his bed while (hopefully) listening. My 12-year-old C. either sits on the sofa downstairs in her pajamas, or stays in her bed surrounded by pillows and blanket and stuffies. They are never at their actual desks (which are too filled with random project items to be much use as working surfaces anyway).

Posture and sensory needs, however, are only part of the picture of online learning in our household. On the same day I took the above picture, my son D. came by my room to quietly inform me that C. was sobbing in her bedroom. When I headed over to see what was going on, C. was muted and had her camera off, so she was able to say to me in between tears, “I DIDN’T KNOW I WAS SUPPOSED TO DO THE MAP TO BE ABLE TO DO THE BOSS BATTLE! EVERYONE ELSE KNEW! I KEEP TELLING MR. B BUT HE DOESN’T ANSWER!” I checked the chat box in her Zoom class and was mortified to see that C. had sent numerous panicked texts – ALL IN CAPS – to her geometry teacher Mr. B. during instructional time, while he was trying to hold class. She even used the phrase “FLIPPIN’ ASSIGNMENT” at one point.

My first task was to calm C. down enough to get a sense of what was actually going on. She explained, through sobs, that she had no idea a particular assignment was due that day – she didn’t see it in her “Upcoming Assignments” tab, and hadn’t seen an email coming through about it. (C. has a diagnosis of ADHD-Inattentive, so keeping effective track of assignments is an ongoing challenge.) She felt even worse because it seemed that somehow all her classmates had known about it, and she wasn’t able to check in with one of them (like she would in a real-life classroom) because chat between students is disabled during Zoom. I asked her if she had contact information for any of the other students – so she could try texting them by phone – but she didn’t. She finally stopped crying, and was able to focus enough to get back to listening to her teacher. I told her she owed him an apology after class for sending him so many upset chat messages during class, and she agreed. We also talked about needing to brainstorm what had gone wrong in terms of not having the information she needed to be successful.

Eventually she checked in with Mr. B. and was able to get (mostly) caught up. (And I was reminded I need to follow through on setting up a meeting to discuss C.’s 504 plan with him and her other teachers…)

That day, however, my equanimity was shot. Having two of my three kids get so upset over schooling that I had to sit with them to help them emotionally move through it was simply indicative of how hard this learn-from-home reality really is.

With that said, I remain genuinely grateful – on some levels – for the “forced-opportunity” to stay so closely involved in my kids’ learning. Pre-pandemic life was moving so quickly, it was easy to feel like days were simply slipping by. I happily outsourced schooling as much as possible, and was able to get away with not worrying about specifics – but I also wasn’t really clued-in to the details of my 2E kids’ unique learning challenges and triumphs in every subject.

Now, I can’t help but be involved – for better or for worse.

Like every other parent in the world whose kids are learning from home right now, I’m taking things one day at a time, one class at a time, one assignment at a time – and I simply laugh when I see pictures of what things “should” look like.

Not in a million years.

Copyright © 2020 by HalfoftheTruth.org. Please feel free to share with attribution.